I-The coalition of families of persons kidnapped by ISIS

The coalition: the coalition is a public interest, non-profit organization registered in France the year 2019.

The families: the coalition was founded by the initiative by families of people who were kidnapped, detained or held captive by ISIS between the year 2013, the year ISIS announced itself, and 2019, the year ISIS collapsed and lost its control over the territories it ruled for six years. These families are represented by women and men who lost a member or more of their families; a mother or a father, a daughter or a son, a wife or a husband, a sister or a brother.

The residency of the families of the absentees right now spreads between Syria, turkey and Europe. But the door to join the coalition is open for other representatives of families of ISIS victims regardless of their nationalities, place of residence, belief or their cultural or political orientation.

The kidnapped, detainees and captives by ISIS all can be named ‘absentees by force’, as long as they didn’t appear after the collapse of the organization and as long their whereabouts and fate, whether dead or alive, are still unknown.

Those who were made absentee by ISIS, kidnapped, detained or held captive, while they controlled parts of Syria are either opposing political activists or leaders of local communities or journalists or warriors in opposition militias or civilians who belong to organizations or political mainstreams who opposed ISIS in its practices and directions or even civilians from different sects or ethnicities other than that of the members of the organization during its exponential military operations or simply people who violated the rules of conduct of the organization.

The families of those kidnapped had been holding, alone or in small groups, the responsibility to keep the ISIS absentees case alive on social media and media outlets levels with their own means and capabilities since the start of this issue in 2013. But the cause remained marginal on the political level during the time of the ISIS’s power and control or even after its collapse and the decay to its core of power and losing its territories with the beginning of 2019.

Ever since 2014, the military operation against the organization resulted in the gradual fragmentation of its territories between the disputing powers in Syria, for three different political-military powers took the place of the organization in the territories it controlled previously or in which it partially existed in the aforementioned period of time:

None of these forces paid attention to the absentees by ISIS file, while they concentrated their efforts on the group burials left by the organization. Since the USA offered financing to preliminary response teams- belonging to certain local councils of the Democratic Syrian Force- which worked on digging these group burials in a primitive way and moving the remainings to official cemeteries. But these exhume operations didn’t help in the unearth of the fate of any of the absentees, but only helped in identifying some of the remainings that belonged to ISIS fighters as well as the moving and proper burial of some local civilians who fell during the military operations against ISIS. 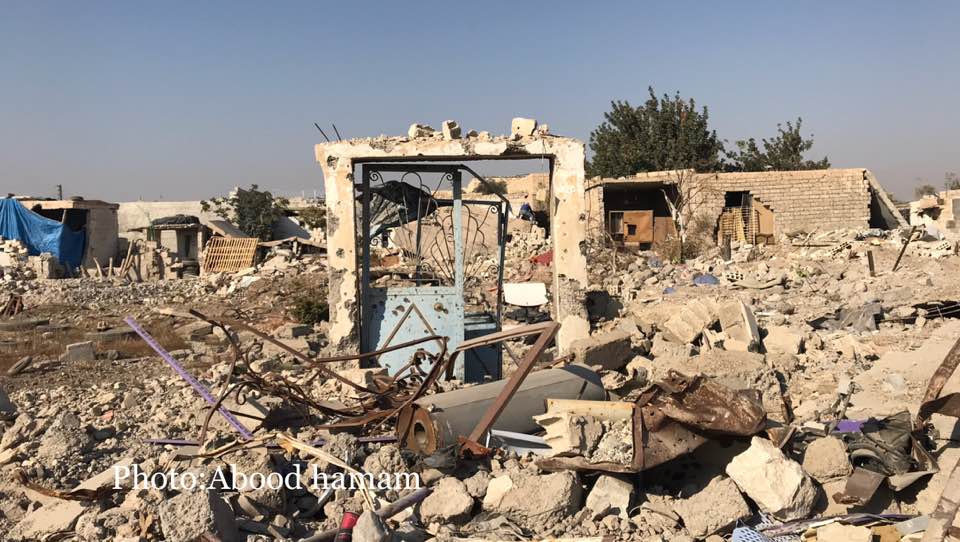 A photo of Raqqa city, taken by Aboud Hamam

The absentees file wasn’t on the radar of national and international human rights organizations, apart from a report issued by human rights watch titled: the kidnapped by ISIS; the inaction to unveil the fate of those missing in Syria. In February 2020.

The coalition of families of persons kidnapped by ISIS works to achieve two primary goals which are unveiling the fate of those kidnapped, which became absentees by force the moment they were kidnapped, and to bring the culprits to justice. And for this reason the coalition is open to cooperation with national and international organizations involved in the issue of unveiling the fate of absentees and works itself on documenting the kidnapping cases to build a solid case socially, politically, legally and to pursuit those who committed the crimes of kidnapping and detaining.

II- the sequence of events

With the uprising of the Arabic Spring, the peaceful demonstrations set off in Syria in march, 2011. The Syrian forces faced those demonstrations with killing and arrest. These practices forced civilians to bare arms and also forced military and security forces members to defect and join the uprising to defend the peaceful protestors. And in the summer of that year it became clear that demand of change become deeply rooted in the Syria streets and that returning to before march was no longer a possibility,  in turn it appeared that the basis of the regime power were starting to shake and that the internal social and political bases for it to remain in power were starting to erode. And that is why since that summer the regime looked outside for help, and the external interference was starting to appear to the Syrians from Hezbollah and Iran by directly helping in oppressing the revolting Syrians.

And in the month of May of that same year the head of the regime declared a presidential pardon on hundreds of the jihadis that were arrested in various prior periods either because they were parts of jihadi groups or after their return back to Syria from joining jihadi groups and participating in the fight in Iraq within jihadi groups after the fall of previous Iraqi president Saddam Hussein in the year of 2003. These jihadis were Syrians and foreigners, and the Syrian regime had exported of them to Iraq in the year of  2003, and facilitated the passing of foreigners through Syria to Iraq. at the same time, the regime continued to arrest and kill the protesters, the civil activists and the ‘citizen journalists’ in the hundreds of thousands and created whole an illusion that the rebels are terrorist extremists creating a prophesy it had contributed to its coming true in Iraq and Lebanon and had by then started to achieve in Syria as well.

In synchronism with that, the regime military operations and its security forces attacks escaladed against the rebellious neighbourhoods and cities, so the regime started to raid the cities and violate the rebelling neighbourhoods where they committed massacres on sectarian bases and its soldiers raped many women who participated in the demonstrations and forced to displace- and still is- millions of Syrians out of their homes in the widest phenomenon since WWII.

Despite all that, the regime, during that time, lost control over vast parts of the Syrian soil. And it became clearer and clearer that Syria is turning into a failing state. And that situation was always fitting for militia based organizations many of which started to set a solid foot inside Syria gradually, which complicated the situation and motivated many countries, the Arabic Gulf countries, Iran, Russia, turkey, USA, France and Britain to interfere directly in the Syrian conflict after it was involved previously only through local parties.

The killing and destruction and the displacement as well as releasing thousands of jihadis from prisons created a suitable environment to change the fight in Syria from political to sectarian which reinforced the position of the regime on the international stage, add to that the interference of other countries which took the Syrians out of the equation completely.

With arrival of the year 2013 and with the escalation of violence and its sectarian and international transformation, the peaceful and civil demonstrative movement lost its engines and its social bases in favour of the more violent forces.

In the peak of the peaceful movement defeat and with the Syrians losing the power to effect the direction of events in their country, the organization (Islamic state in Syria and Iraq) appeared, which will be later called Daesh (ISIS). This organization is the latest manifestation in a series of extreme jihadi organizations which started during the soviet occupation of Afghanistan in the eighties of the last century. The organizations; ‘ Al-Qaeda Jihadi’ and then ‘ Islamic state in Iraq’ were the latest ancestors of ‘Daesh’, which was able to take control of some Syrian territories and then spread again in Iraq.

III. ISIS and its human combination:

After being declared as the ‘islamic state in Syria and Iraq’, the local activists in the city of Alraqqa called the organization ‘Daesh’, by taking the first letter of each word of its name in Arabic, but also to refer to it as something cheap or a product. Ever since the name started to circulate in the media and on the tongues of politicians to the point it took over the original name. the organization consisted of four primary human sources:

The Absentees, our cause for truth and justice:

ISIS was successful in posing itself starting by the city of Alraqqa. The organization assassinated a number of local activists and free army fighters then fought the rest of the militias in the city in defeated it. While doing that it started to kidnap a number of peaceful activists in the May 2013, and the phenomenon of kidnapped continued while accompanied by the organization’s military expansion to new territories in Syria and Iraq. These kidnap and assassination operations forced tens of thousands of active civilians to flee their cities and villages and take refuge in neighbouring countries, which appears to be the result the organization sought in the first place, which is emptying these territories of any different/opposing opinion or political project in these territories.

In general, whom the organization kidnapped were opposing activists who were active in the democratic movement since 2011 atleast. The kidnap, arrestation and assassination operations were a primary part of the organization plan to clean the social ground in the territories which it was able to control. For this reason, the Syrians who looked at the organization as a part of the anti-revolution which objectively reinforced Alassad regime and showed the world as if the dispute in Syria is between a secular regime and the jihadi extremism, where as ISIS actually destroyed the people’s democratic movement in all the territories which he controlled and its crimes covered on the massacres Alassad regime committed against the Syrians.

In reality, these kidnap, arrest, and detain operations happened in synchronization with the uprising of the organization and was an essential element of its survival and continuity, hence logically one would think that the collapse of the organization would help in result in unveiling the fate of the absentees and in the pursuit of those who remained alive and who committed these crimes. However, with the collapse of the organization in Iraq first and then in Syria it looked clear that the forces that replaced ISIS in controlling the territories it rules previously weren’t concerned by the humanitarian situation remnant by ISIS.

For this reason, the families of those kidnapped, missing and absentees started to move towards building the cases of forced disappearances committed by the organization.

Our work as families on the files of our loved ones who are missing is resisting forgetfulness and reinforcing our right and preventing the powerful from treating our pain as collateral in their disputes.