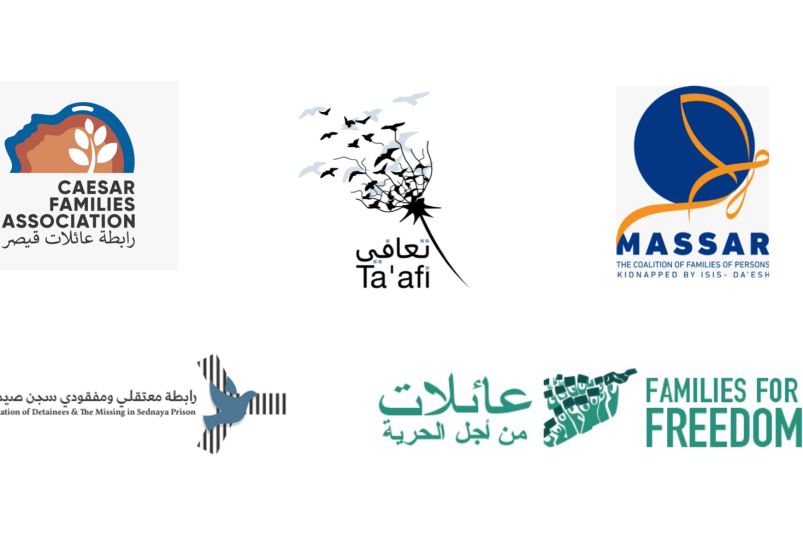 The Association of Detainees and Missing Persons in Seydnaya, Caesar Families Association, Coalition of Families of Persons Kidnapped by ISIS (Massar), Families for Freedom andTa’afi Initiative welcome the adoption of the United Nations General Assembly Resolution A/C.3/76/L.31/Rev.1 on the situation of human rights in Syria.

On 10 February 2021, the Association of Detainees and Missing Persons in Sednaya Prison; Caesar Families Association; Coalition of Families of Persons Kidnapped by ISIS (Massar); Families for Freedom; and Ta’afi Initiative, issued the “Truth and Justice Charter”, a common vision to work on enforced disappearance, arbitrary detention, and torture in Syria. The Charter created a momentum on the international level, and emphasizes the central [and] leadership role of victims’ associations in working on this cause.

In parallel with these efforts, and after the frustrating wait for solutions that never came, the aforementioned associations claimed their central role and moved beyond broad slogans and demands to propose concrete solutions and effective responses to address the crisis of the detained and disappeared in Syria. Together, they launched a study proposing the establishment of an effective body or institution to secure the release of detainees, discover the fate of the disappeared and missing and find the remains of those who are no longer alive.

The proposal was welcomed on the international level, where the United Nations Secretary-General, the High Commissioner for Human Rights, the International Commission of Inquiry on Syria, and many international and local organizations emphasized the urgent need to find solutions for this humanitarian crisis. They also expressed their support of the request of the victims‘ associations to establish a mechanism that works to uncover the fate of the forcibly disappeared and solve the issue of detainees.

The associations of survivors and families, founders of the Truth and Justice Charter, welcome the United Nations General Assembly Resolution A/C.3/76/L.31/Rev.1 of 17 November 2021 that reinforces the central and leadership role of victims. After recalling the recommendation of the Commission of Inquiry to establish an independent mechanism with an international mandate to look into the issue of the missing and forcibly disappeared, as well as the positions of the United Nations Secretary-General and the High Commissioner for Human Rights in this regard, the resolution “requests the Secretary-General of the United Nations to conduct a study [before the end of the first half of 2022] on how to bolster efforts, including through existing measures and mechanisms, to clarify the fate and whereabouts of missing persons in [Syria], identify human remains and provide support to their families, in consultation with the Office of the United Nations High Commissioner for Human Rights and based on the recommendations of the Commission of Inquiry, with the full and meaningful participation of victims, survivors and their families and in consultation with other relevant actors” and “reiterates the importance of not tampering with or contaminating mass grave sites in [Syria].”

This resolution is the result of intensive and continuous efforts of the founders of the Truth and Justice Charter, with the support of a large number of partners and allies.

We welcome this resolution as a first step on the way for the international community to assume its legal and moral responsibilities towards the detainees and the disappeared in Syria and their families, while we continue the fight to achieve our goals in releasing the detainees, revealing the fate of the forcibly disappeared, and ensuring the hand-over of the remains of the deceased among them to their families.

We thank the United Nations Secretary-General, the High Commissioner for Human Rights, the International Commission of Inquiry, and all institutions and individuals working and fighting relentlessly to achieve justice in Syria. We also thank all the countries that voted in favor of the resolution for siding with truth and justice.