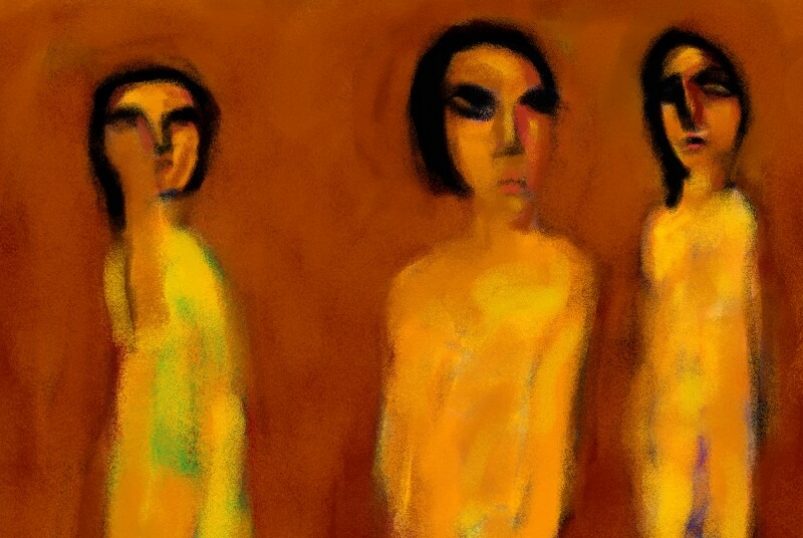 A painting by Talal Abu Dan.

In this first testimony, Miss Hiba Ismeel Al-Hamed recounts her and her sister Sarah’s experience of traveling to their home in Raqqa, which is controlled by the “ISIS”, returning from Aleppo, which is controlled by the Assad regime, and where they had to go to resume their study at university. Hiba recounts how she found that the rumor of a ban on traveling without a “mahram” had turned into reality upon her arrival in Raqqa, and she now had to face a Tunisian jihadist who would give her the choice between confiscating her card or transferring her to the “Hasbah” device.

After a long journey from  Raqqa to Aleppo, a journey dominated by anxiety, terror and constant humiliation that we were subjected to at the checkpoints of the Assad regime and the “ISIS” organization, we arrived at the “Al-Maqas” checkpoint at the southern entrance to the city of Raqqa. The ISIS checkpoint has a buzzing name and a frightening effect that it creates in the hearts of all Raqqawi women that have passed through. This checkpoint was known for the barbarity of its members and their scrutiny of the simplest details of the girls’ appearances and the reasons for their travel.

We are in August of 2014. A new rumor spread that the organization issued a decree banning girls from traveling without a “mahram”. “The “mahram” is the husband, or the male who cannot marry a single Muslim girl, like a brother or father.” Nine months before that time, my father had been kidnapped by them, and my only younger brother, Hazem, had not yet completed his twelfth year. This rumor let us think of that checkpoint in our minds as both isthmus and a kingdom of horror. Our necks may not escape the tusks of its monsters.

Just before we reached the checkpoint, I closed my eyes for a moment. I took a deep breath in preparation for a duel that started as soon as the “Mujahid” got on the bus asking the bus driver to turn the lights on so he could see us well.

The young men didn’t ask the young men sitting in the front seats of the bus any questions and they didn’t ask for their IDs, either. Instead, they approached us, the “women” at the back of the bus. My heart started pulsing faster.

His appearance was capable of spreading terror in the souls of the most powerful and self-confident girl, a man in Pakistani clothes, with a long beard and curly hair touching his shoulders.

He started asking the girls one by one: Who are you coming with? And as soon as she answered mentioning the name of the young man accompanying her, that man uncovered himself uttering the word present.

At that time, I whispered to my sister to mention the name of one of my friends traveling with us, and he would certainly support us, but because of our fear that our lie would be exposed, which would lead us to the crime of lying and traveling without a mahram, we decided to face the calamity honestly, regardless of the consequences, just like two noble knights courageously waging a battle that they had already known its end.

The jihadist’s sword reached my and my sister’s necks when it was time for our interrogation. He stood with his huge body in front of us and asked clearly and firmly, as if he knew in advance of our crime:

– “We have no mahram; we’re traveling alone.” I murmured in a low voice, not looking at him. His image dimmed behind my tears.

So, he started raising questions in classical Arabic.

– “How do you travel without a mahram? Where do you live in Aleppo? Why do you study and the Mujahideen die? What is this illegal veil? Is this a cloak that you are permissible to wear?

He uttered his words like a shower of bullets that smashed our crystal souls and closed our lips. Silent and astonished, we were unable to dismiss his accusations. I looked at my abaya; it was wide and simple, without any embroidery, it was the one they wanted us to wear. Why did they attack my dress like this? Was it because I replaced the veil designated by them and sold in their store, “The Guarded Durra”, with a black hood that I wrapped around my head and put in front of my face, or because we dared to transgress their laws?

The “Mujahid” interrupted my muted conversation with myself when we he asked us to choose confiscating our university cards or summoning the Hasbah to arrest us. The “Hasbah” is the body that monitors people’s commitment to ISIS laws and punishes them if they violate them.

The three words “Hasbah, arrest, confiscation” started recurring in my mind, remembering my mother’s face that must be anxious because we were late, and thinking of what would happen to her if they arrested us. We would then be three absentees in the ISIS prisons: my father, Sarah, and me. My mother’s face, tormented with fear, was matched in my mind by the face of one of the al-Hesbah executioners beating Sarah’s weak body with her whip while I was weeping in the corner of the room waiting for my turn.

I started swallowing my tears while my lips were shaking due to my confusion and inability to make a decision. I did not understand at the time why I was holding on to my university card though it was easy to get a new one. Perhaps I was spontaneously expressing resistance and a refusal to give in to them, for they turned our lives into hell when they took away my beautiful father from us.

The oppression was ravaging my soul, I was obliged to obey the orders of the one who kidnapped my father, I was incapable of shouting at him: “O thug, mercenary, thug, give me back my father.”

Sarah realized my hesitation and tried to take responsibility and take a decision for me:

– “Let us give out the cards, or the Hasbah will take us.”

Like a child that was about to throw her favorite game into flames, I told her with tears suffocating my soul:

I could not defend my decision against shouting, getting nervous, and insults that I wasn’t used to face, so I extended my trembling hand holding the card tight as if it wanted to change the fate at the last moment in order to keep it; fate surprised me when the mujahid pressed the card and wanted to break it.

– Please do not break it. It’s ok. Tell the Hasbah to take us and return my card!

I do not behave according to your mood …

And as soon as the argument ended, he took a quick step to the front of the bus, so Sarah and I followed him. Sarah was trying to open the door that was closed in their minds programmed to issue judgments and orders only.

– Be guided by God, Sheikh! What you are doing is not permissible.

– Whoever allowed you to come to the men’s section, go back to your place, hurmah.

“Sheikh, hurmah!” it’s a funny, hysterical scenario. “The sheikh” is shouting, and “the hurmah,” Sarah, tries to calm him. The scenario ended with the “Mujahid” leaving the bus when my younger brother Hazem, with his slender body and innocent, attractive smile, appeared between the two rows of chairs on the bus.

I ran to him and hugged him the same way I used to hugging my father after any misfortune befell me. He seemed amazed at the intensity of my excitement because he didn’t know what had happened to us. He quietly asked me to get off the bus because Mama was waiting for us at the checkpoint.

I got off the bus with heavy steps; I threw myself into my mother’s bosom, trying to unite with her, me and my sister, in a shell of sadness. We cried, and cried for long, saying in whimper:

She hugged us in amazement and cried with us without knowing the reason:

They took our cards, threatened us with accountability and insulted us.

-Why are you crying? No need to cry. I have not done anything to you …

I raised my head from my mother’s chest and saw young men gathering around us and arguing with the “mujahid” because of what he had done to us. My mother rushed to calm them both the mujahid and the young men, fearing that they would be whipped for arguing with him for our sake. She tried to keep them away from the battlefield, trying to calm the “mujahid” with some words:

– “My sister, they are like my sisters, and I am afraid of the regime’s soldiers. That’s why I have been so strict to them. And your son (he pointed to my brother) is like my brother. “Let me kiss your head!”

His last words were addressed to Hazem, approaching him to hug him and kiss his head, but Hazem seemed frightened and walked a step backwards whenever the “Mujahid” approached him.

In the end, the “Mujahid Sheikh ” returned our cards to us and apologized to us as a kind of whitewashing in front of the huge amount of tears and humiliation that we were subjected to, especially with the criticism of the passengers who witnessed the incident, where one of the people told him:

“Islam does not accept that Muslim women are subjected to insult and badmouthing, what religion accepts this?”

The truth is that he who does not accept insulting us is the lover of our souls and our only support in this world is my father. It’s father, our guardian angel who refuses to shed a tear out of fear or out of sadness. He never saw the brokenness of his girls who learned strength and being serious from him. My absentee father who did not hear me at that moment when I screamed in the depths of my soul:

I asked, but no answer relieved me, so that I could stop standing the burden of looking at the crude features of the face of the malevolent “mujahid” who was one of the Tunisian immigrants who came to jihad in Syria, as he claimed; that’s what I knew later about him. In fact, he only came to insult us altogether with thousands of Syrian girls and to dip our faces in the mud of humiliation and insult.

This “mujahid” may or may not know that we, young women and men of the revolution, ignited the revolution and faced the bullets of the regime while wearing short shirts and jeans, without mahrams.