About Ismaeel , the dream of freedom and a prolonged absence in ISIS prisons 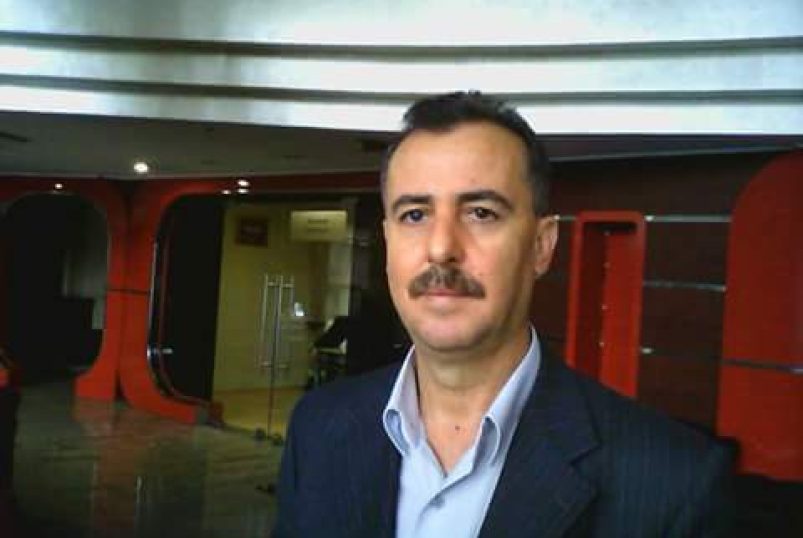 The name Ismaeel Alhamed is connected in the memory of those who knew him with a sense of security and confidence, his presence and his work as a doctor always give. It is also connected with his ability to give them courage and reminding them that “on this earth what deserves living for” even in the darkest of moments. That’s how he was in all of his roles; son, brother, husband, father, doctor, friend and a citizen interested in public matters.

Ismaeel Alhamed was born in Idlib , the year 1964, in a poor rural environment, an environment that tested him so early, turning him into a self-made man, capable of defining his priorities and running his life in a manner that is very punctuate and  hardworking, and to identify oppression and social injustice wherever they existed. Being the self-made man he is nurtured in him a sense of pride in a country where its children endured daily doses of humiliation and degradation. It also reinforced his high sense of duty towards his fellow citizens.

In the eighties of last century while he was in medical school in the university of Aleppo, then, throughout his years of majoring in surgical medicine, he became involved in the public interests, even though the political movement then was restricted and declining fast due to the regime oppression. In that era, as many others, he dreamt of a home country where human freedom and dignity is respected.

He built with his wife , Zubaida a warm nest in Raqqa city for his four daughters and one son, he provided them with a warm family atmosphere full with love and passed on to them his values and principles, for from him they learnt the joy of reading and the importance of educational achievement. With him they experienced the liberty of discussion, questioning and objecting. From his courage and political awareness, they got to know the importance of freedom, dignity and democracy. For he was politically opposed to the regime of Hafez Alassad and that of the son Bashar Alassad, he was also one of the signatories to the Declaration of Damascus in 2005 and a member of his national council.

He opposed the reign of oppression despite all the dangers and the threats from a regime that knows nothing but criminality towards anyone that dares saying “no”. Ismaeel was to his children the brave father and a source of inspiration, power and the most beautiful example.

Ismaeel was a surgeon with a great humanitarian sense, devoted to his profession and its humanitarian nature. He was the refuge of his patient and friends and everyone that sought him, to the point that some called him the doctor of the poor and later on the doctor of the Syrian revolution in Alraqqa city. He was simply a distinguished and exemplary doctor in his nature, ethics, humanity and ideas, the arrival of the revolution came to prove that.

For the doctor then decided to end his residency in Saudi-Arabia after three years of working abroad and returned to Syria to achieve his dream in participating in the peaceful movement in the late part of 2011. He was among the first to join the peaceful demonstration, for the revolution was a dream coming true. He participated with his family in the demonstrations against Alassad regime and did not stop there for he dedicated his profession to heal the wounded from the demonstrations ant the displaced from other Syrian parts , he also worked in the relief work as a manager for a big relief project despite the constant threats and his arrest by the regime. He did not let dangers stop him. All he cared about was seeing his country get rid of the dictatorship so that future generation could have the chance to live in a free democratic country.

After the armed opposition took control over Alraqqa city the doctor refused to flee during the first battle in the city despite the barbaric bombing by the regime. And in the months that followed the liberation of the city he stayed with his family, practicing his profession and working in relief programs and politics in a time where the city badly needed that. What distinguished him that was his ability to influence his surrounding and the revolutionary youth, in his simple way of explaining things and expressing his opinions while maintaining respect for other opinions. He was worried by the increasing spread of the manifestation of arms and the Islamic extremism among the armed opposition in the city.

And his fear increased with the sudden but fast rise of the Islamic state (ISIS) and its tactics of kidnapping its opposers but that did not stop him from expressing his rejection and opposition to the organization and so he participated In demonstration demanding the release of kidnappees held at its prisons until the day he became one of them.

The “doctor of the poor” was kidnapped in 02/11/2013, the black November as his family calls it, the month in which their lives changed forever.

Shortly before his kidnapping, he was threatened multiple times by ISIS but he didn’t take those threats seriously or more precisely he couldn’t get himself leave and give up all he dreamt of he used to always say “ this is our country and we won’t leave it to strangers we will fight until the end”.

Two cars interpreted the way of “the doctor of poor”, Ismaeel Alhamed, on his way to his clinic, from those cars armed men got out and took him to an unknown destination. The neighbors who witnessed the kidnapping told the family what happened. That was the mast thing they heard of him, and ever since the family was unable to get any confirmed news about his fate. Meanwhile his wife was on her way from Aleppo where she spent few days helping her daughter Hiba and Sarah prepare for the new school year at the university of Aleppo. Zubaida never got a chance to see her husband for he was kidnapped few hours before her arrival. When she did arrive, she didn’t see her companion of her life waiting for her at the bus station as always.

Since that moment and from that place, in a city controlled by obsessed criminals and roaming weird cons, Zubaida started her journey of suffering looking for her missing husband.

The family was divided between Alraqqa and Aleppo. Sarah and Hiba remained in Aleppo to continue their studies in the worst situation a family can endure. They did so cause they realized the importance and value of them continuing their studies for their missing father. Meanwhile Zubaida remained with her two daughters, Reem and Maria, and her son Hazem in Alraqqa to continue her search for her husband. The mother did not hesitate to knock on the doors of anyone who could help her. She went to (ISIS) leaders, to the sheiks of the tribes and to the important figures in the city, knowing that her eyes could meet those of her husband’s kidnapper without knowing so. She never received a good answer despite putting so many hopes on the exchange deals, deals that the leaders of the tribes and Free Syrian Army promised her. She used to spend the nights on the house porch watching the street, fearing Ismaeel would come and she wouldn’t be the first to see him.

The family remained in this situation for eleven months, in which it endured a lot in a city controlled by ISIS and enforced the strictest rules of behavior and movement especially rules of women out doors. With the absence of Ismaeel the family list the source of security and stability, and on Zubaida’s shoulders, fell the heaviest of responsibilities. For she had to look for her husband and at the same time protect her family from any possible danger in a war-torn city. She also had to give them hope and strength for the family to stay together and to protect if from collapsing. She and her children were aware how alone they were amid that disaster and that they had to support each other in order to survive, with love and cohesion they were able to face the sense of severe loss that the “pillar of their house” left behind.

In October 2014 and after the international coalition started its attack on ISIS and the city and with the increasing dangers on the family, Zubaida decided that the best she can do is to save what remained of her family and leave the country to Turkey.

There in Turkey, the family stayed three months before leaving all together to their final destination, France where they started the journey of asylum and the pursuit of stability in a new country, and there, in France, the family keeps carrying the wound of Ismaeel, the absent but always present figure, and the pain of a country that gets worse by the day, and living displaced abroad.

Today, Zubaida lives with her four daughters and only son in France, all the children succeeded in continuing their higher education in French universities. They started creating a new life. The wound of Ismaeel’s disappearance never healed and they never stopped waiting for him, it’s an everlasting sadness that not even time can heal, but they are nurturing the hope and mending the wound with the love that brings them together, with the motivation to achieve their own-selves, perhaps one day Ismaeel would return and be proud of their accomplishments.

Ismaeel’s family never stopped fighting to learn the truth despite knowing all the political complications that surround the cause of the kidnappees by ISIS. For today ISIS does not exist anymore and controls no land as well as no one is showing real sign of attention concerning the fate of those who disappeared by force. The case of their father as well as thousands of other absentees is a just cause, a cause that must be defended and carried until obtaining truth and justice. They never gave up despite all the disappointments they endured. Ismaeel’s family feels that they were abandoned by everyone in this battle of theirs, and for that reason the family constitutes a part of the coalition of families of persons abducted by ISIS. It joined The Coalition of Families of Persons Kidnapped by ISIS-Daesh full of hope that by uniting the efforts of all the families it can someday know the fate of Ismaeel and all the absentees by the hands of ISIS.