Online press conference to launch the “Truth and Justice Charter” for Syria on February 10, 2021 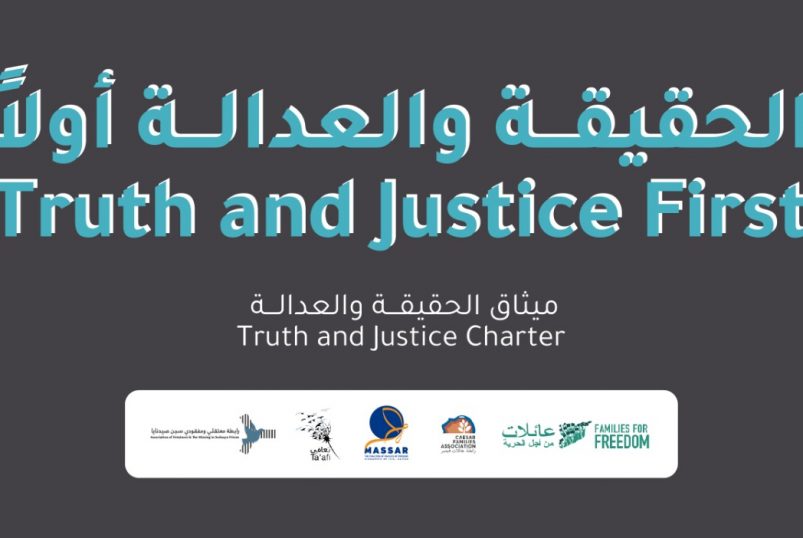 Massar invites you to the e-launch of the Truth and Justice Charter on February 10, 2021, at 16:00 Damascus time|15:00 Berlin time|9:00 New York time. The Charter was drafted by five survivors organizations from Syria and their families to reflect their vision on processes of political transition, transitional justice, and accountability in Syria.

The Association of Detainees and Missing in Sednaya Prison, Caesar Families Association, Families for Freedom, Coalition of Families of Persons Kidnapped by ISIS (MASSAR), and Ta’afi Initiative have been five of the most proactive and present survivors’ organizations over the years in Syria. They have joined forces and coordinated over months to build a common basis to advance the cause of justice and truth in Syria. By doing so, they place the voices and demands of the survivors, the victims, the detained, and the forcibly disappeared and their families at the forefront of any lasting political solution in Syria.

The Truth and Justice Charter reflects our common vision on how to advance victims’ rights. It sets revealing the truth, ensuring justice for the detained and the forcibly disappeared and their families, and holding violators accountable as the building blocks for lasting peace in Syria.

The Charter defines the priorities of the victims and their families in transitional justice processes, and it formulates the position of the organizations regarding ongoing or future peace negotiations and the so-called “recovery” or “reconstruction” attempts.

Until today, only modest efforts have been achieved to address the issue of the detained and the forcibly disappeared. Yet, there is wide recognition among Syrian civil society actors that victims’ efforts are central to advance the justice agenda and that their meaningful and effective participation in any future transitional justice process is essential. The Charter is meant to serve as a joint roadmap for the organizations of victims and their families. It is also intended as a reference and a strategic vision available to all stakeholders, human rights organizations, policymakers, and decision-makers involved in such processes.

Simultaneous translation to Arabic/English will be provided.

This event has been organized with the support of Impunity Watch.