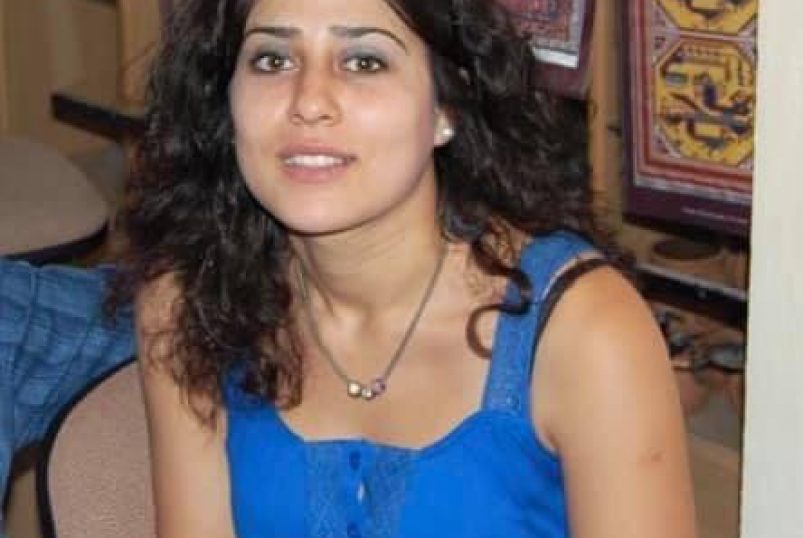 Samar has got a very strong personality; she’s very independent and much loved.

With these words, Maysa Salih describes the character of her sister Samar Saleh, the “unbridled and passionate” young woman, who wherever she stayed she left her mark with her ability to spread joy and happiness. She is known for her hustle and bustle in life, a clamor that was not extinguished until she was kidnapped by “ISIS”, as she was the youngest daughter, and the smile and joy of the family.

Samar was born on June 28, 1988 in Al-Atareb, in the western countryside of “Aleppo”, where the family lived until they moved to Aleppo, when Samar was in middle school. This girl was looking to life with eyes sparkling with passion, positivity and determination to achieve self-fulfillment, distinction and success, as she showed excellence in all stages of her studies and a passion for knowledge and reading, especially reading books related to myths and history.

Samar chose to study archeology and joined the Faculty of Archeology and Museums at the University of Aleppo, from which she graduated with distinction in 2012. Samar was very passionate about her field of study, and her obsession with archeology and excavation began early, as she participated during her studies in several excavation workshops inside Syria. In the eyes of her sister Misa, Samar was growing up, maturing, becoming independent in life, and achieving exceptional distinction from the members of her generation and her friends:

“I used to see how she grew up; she has got her own challenges in life; she was an unbridled person in life. What she sought was different, an end with a good future, a very independent person. She was able to be open-minded and different from her companions of the same age.

Samar’s strong, rebellious and passionate personality has made her feel free to participate in the Revolution of Freedom and Dignity since it began in 2011. At that time, she was still a student in the Faculty of Archeology and Museums at the University of Aleppo, so she participated in the university movement and organized with her friends several civic activities, including peaceful demonstrations, distributing leaflets, and organizing activities at the University of Aleppo and in the various rebellious neighborhoods of Aleppo. She was arrested by the branch “Air Force Intelligence” at a protest in 2012, as a result.

The “Syrian regime’s” repression of the peaceful movement and protest in Aleppo and its countryside intensified, and the regime started to violently bombard the countryside of Aleppo , which led to the displacement of hundreds of families from the countryside of Aleppo to the city of Aleppo, so Samar began relief work to help these families. She and a group of her friends equipped several schools in Aleppo, in order to receive the displaced and to secure all their basic needs. Samar worked with several schools in the “Old Syrian” neighborhood and “New Syrian” neighborhood, including Hoda Al Shaarawi School and others.

“She used to be faithful with all her heart to the relief work; she did not sleep during the crisis of the displaced from the countryside of Aleppo; she did not go home except for a few hours: she slept, ate and returned to work. She used to spend all her time helping the displaced and talk with people to secure mattresses, blankets and food, whenever a family came and asked for help immediately.

She suffered from psychological and physical crises as a result of her dedication to the relief work, which used to take all her time from morning to late night. She listened to stories of murder and torture, and she witnessed the tragic situation of children and all they suffered because of the military campaigns of the “Syrian regime” against the countryside of Aleppo.

Samar’s work and civil activity was not limited to relief work in the city of “Aleppo”. Rather, despite the seriousness of the situation, she went on Fridays Al-Atareb to participate in the demonstrations and coordinate with the civil movement there. Maysa remembers Samar’s enthusiasm in a demonstration in which they both had participated in Bustan al-Qasr in Aleppo, saying: “I saw how she was chanting, how she was running the demonstration; all the people of the region knew and loved her and were ready to protect her.”

Samar was clear in her rejection of the armed movement, and she supported the idea of ​​continuing the civil revolutionary movement. Although she was frustrated by the escalation in using arms, and the repressive excesses done by groups claiming that they support the revolution, she decided not to give up but continue to defend the peaceful movement.

Samar graduated with distinction in 2012, and she got a scholarship to do her master’s and doctoral studies in “Egypt”. She experienced a long struggle before accepting to leave Syria for Egypt to resume her studies. Under great pressure from the part of her family and friends for fear of being arrested or killed, Samar traveled at the end of 2012 to Egypt. However, she did not sever her relationship with the revolution and the movement on the ground, but rather she continued her struggle from outside Syria by participating in activities that support the movement inside.

In 2013, Samar was in Turkey with her partner, Muhammad al-Omar, whom she loved more than herself. He was a “media activist,” a supporter of the revolution, and one of the young men of the first fronts in the movement. He trained activist in the media field inside Syria, and one of his workshops was in Al-Atareb, in which “ISIS” began to operate.

Muhammad insisted to enter Syria and conducting training there. Samar, in turn, did not approve of this trip; both of them felt the dangers of going to Syria, especially after being threatened many times. Muhammad’s insistence on challenging the danger made Samar insist more to accompany him, as she believed that she was able to protect him, being the daughter of the city of Al-Atareb, and she had acquaintances and relatives who could intervene to protect them. 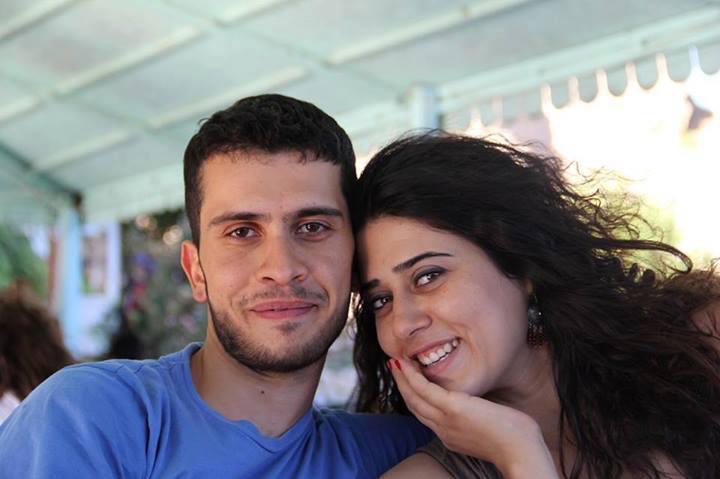 Samar wasn’t right in this; no one intervened to protect the two young people when they were kidnapped by force of arms in Al-Atareb on the thirteenth of August 2013 or when they were beaten and insulted in front of her mother’s eyes, whose cries, screams and pleas did not help her. Muhammad and Samer were with her mother returning to the house when three large “closed” cars stood, and a number of “masked” and heavily armed men got out of them. They violently beat both Samar and Muhammad, and they pulled Samar by hair in front of her mother’s eyes, put them in cars and went away without leaving any trace or evidence indicating the party that carried out the act.

kidnapping Samar completely changed her family’s life and turned it upside down. The tragedy of the family that was originally grieving at that time with the arrest of her sister Maysa in the “Syrian regime” prisons got was more painful. Abducting Samar broke their hearts and turn their lives into a hell of grief, fear and terror over the fate of their daughters. Under the will of her family, Maysa was not told that her sister was kidnapped until she got out of the detention facility when she knew about it via the Internet. Maysa describes those moments: “The news was very painful and cruel for me. I was arrested for 7 months. It was the cruelest news in my life. kidnapping my sister, not my prison, was now the crisis of my life. When I was arrested there was no “ISIS”, but now, after I got out of prison, there is “ISIS” and which kidnapped my sister and many people I know.”

The family tried by various means and with tremendous efforts by Samar’s mother to find out her fate. Immediately after her abduction, Samar’s mother went to the headquarters of the Free Army in the region and the headquarters of the “Sharia courts,” but no one even tried to help. All her attempts were faced with swindling, fraud and lying on several levels, including the threat of facing a similar fate, financial extortion, or even spreading false news several times regarding the liberation of Samar in areas that were no more under the control of “ISIS”. This false news often caused nervous, psychological and physical breakdowns for Samar’s family and also for other families experiencing the same case, who received this news without mercy on the part of those who promote and spread such rumors. Misa talks about her mother’s condition on this search trip, “Mama became obsessed with asking about Samar’s fate, and any word might manipulate her. She went to bad places to ask about her. Recently she was about to go to Raqqah, but we insisted that she wouldn’t go because it was clear she was being lured to go there.

Today, Samar’s family no longer lives in one place, rather its members have dispersed to be staying in different places around the world. Her family is still struggling to obtain information about the fate of their youngest daughter, who grows up year after year into the unknown. Their lives have changed completely and her absence left bad effects that they could not overcome despite the passage of years, and the wound of her absence did not heal as long as the timer continues to count the days that Samar is spending in the prisons of darkness, far from the life she deserves:

Our life has changed a lot; I see how Mama and Papa’s lives have changed. My sisters made choices influenced by her absence. All our lives have changed, especially that of my sister Rasha, the closest sister to Samar; they lived their childhood together, so all of Rasha’s choices changed. Until now, the daily thoughts about Samar’s fate are still breaking me. My frustration and my inability to do something also cause the case to be more painful, for in every detail, there is something missing in your life.

When, in particular,  I see Samar’s friends who are of her age in Europe, after having the opportunity to be in Europe and change their lives, I think of Samar, for she deserves to be living with us, she deserves betters chances for life, and she deserves to stay in a better place.”

The family altogether with a number of local and international organizations and other families of the missing in Syria participate in several activities and conferences around the world, in order to pressure the major countries, especially the countries of the “international coalition against ISIS”, headed by the United States of America, to adopt the file of the missing in “ISIS”, and to help the families know the fate of their children, especially after they announced in 2019 the elimination of “ISIS” in Syria, which only increased their anxiety and fear for their children. Today, Samar’s family has nothing but the effort that it is making for this case and the hope and wishes for Samar to return safely, to end this “nightmare”, which she and her family are living through.

“I wish we had more time with each other. I wish that she was present with us all the time. I hope that she could get rid of this nightmare which she experiences and live the life which she deserves.”