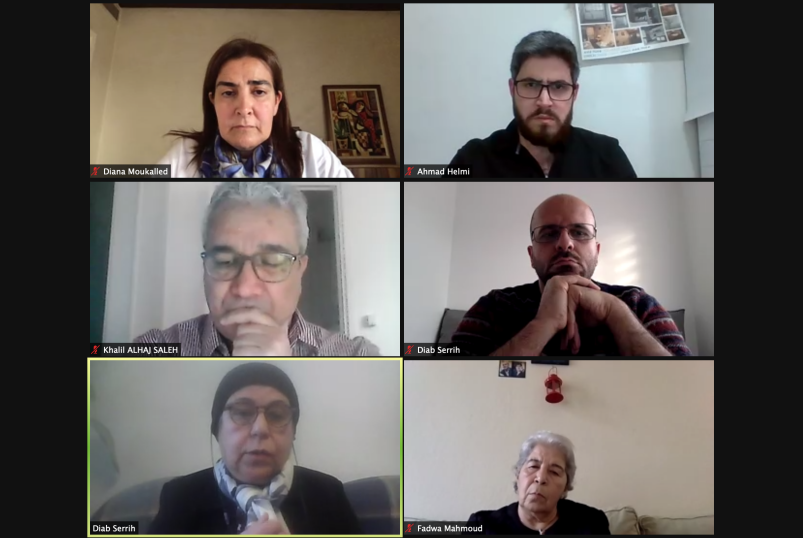 On Wednesday February 10th, the “Coalition of Families of Persons Kidnapped by ISIS- Da’esh” participated in the launch of the “Truth and Justice Charter.” A press conference on the launch took place via Zoom and was facilitated by Impunity Watch and moderated by Lebanese journalist Diana Makled.
Five people, representing the various associations that contributed to the creation of the ” Truth and Justice Charter” spoke: Mr. Ahmed Helmy from the “Ta’afi Initiative,” Mrs. Maryam Hallaq from the “Caesar Families Association,” Mrs. Fadwa Mahmoud from “Families for Freedom “, Mr. Diab Sariya from the “Association of Detainees and Missing Persons of Sednaya Prison” and Khalil al-Haj Salih from the “Coalition of Families of Persons Kidnapped by ISIS- Da’esh”.
The speeches recounted personal experiences of imprisonment, of detention, and of loss––as well as the identities and missions of each association. These related, yet separate, associations are differentiated by the fact that each association’s activities and goals focus on different specific issues, i.e. such as those kidnapped by “ISIS,” the missing amongst the detainees of Sednaya, etc. The speakers’ speeches linked their personal experiences and missions of their organizations with a broader human rights, legal and political perspective which is has been defined and insured by the Truth and Justice Charter.
The “Truth and Justice Charter” is a legal and political text that represents the vision of the aforementioned associations, who were involved in its conception, about issues of truth, justice, accountability, and of ensuring guarantees of non-repetition. The text, whose body does not exceed 3200 words, summarizes a number of issues that represent the core of a political transition, hoped for by Syrians, towards a future ensuring the rule of law and individual and collective freedoms.

The charter also indicates that achieving justice requires not only the immediate release of detainees, the immediate cessation of torture in detention centers, the abolition of field and extrajudicial courts, but also a change in the practices and nature of security and judicial institutions in Syria.

However, access to the truth and to justice must be complemented by holding responsible actors accountable and preventing them from escaping justice via attempts at immunity.
The charter considers the necessity to provide constitutional guarantees that insure criminal human rights violations will not be repeated in Syria’s future.

The unique nature concerning the issue of those kidnapped by ISIS was presented during the speech of the “The Coalition of Families of Persons Kidnapped by ISIS” representative, Khalil Haj Saleh . He explained how the collapse of ISIS and its domain in Syria was the starting point for families to begin the process of finding out the truth of what had happened to their loved ones and for them to begin to work on holding the criminals who violated their loved ones’ inalienable rights to freedom and to life accountable.

He pointed out that the issue of the persons kidnapped by the “ISIS” organization requires a different approach from what has been attempted previously. The exhumation of mass graves left by ISIS in its formerly control areas must be stopped and “ISIS” soldiers arrested by international coalition forces and the “SDF” must be investigated––including foreign ISIS soldiers who returned to their home countries after the collapse of the organization.

The associations involved in creating the “Truth and Justice Charter” hope that the content of this charter will become a subject for further discussion and development. They also hope that its vision will be adopted by the Syrian population in general–– from the families of the martyrs and detainees, to the survivors, the displaced, the handicapped, and all those who have been heretofore effected.

To view the charter please click on:Truth and Justice Charter