About Fouad, the beloved one, the husband, the friend and the companion of my path 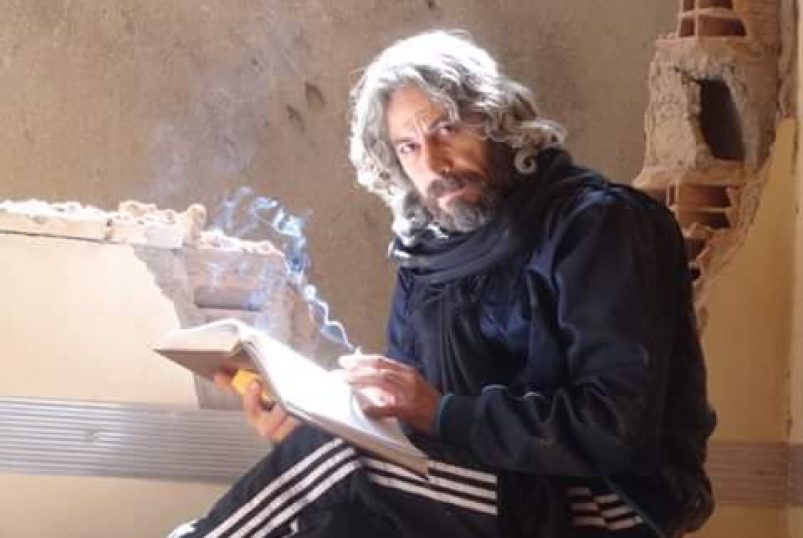 Perhaps any person is facing difficulty in speaking about himself and defining it, so how can I now, being demanded that I dig deep into my memory to bring out the most valuable piece of my soul and scatter it here between these lines, it is Fouad the beloved, the husband, the friend, and the companion on the path; it’s not more sad, painful and more bitter when I start in Recall that I am not completely sure whether he is alive or if he has become part of the past that will not return.

Fuad Son of Deir Ezzor, who is rooted in his values and originality, is the great brother of the Euphrates, the noble man, the delicate poet, the inspiring writer, the rebellious man and the orphan child whose mother passed away, so he was deprived of her tenderness at the age of ten, and he also tasted the bitterness of losing his father when he was eighteen. Fouad’s father had left early after suffering a stroke resulting of grief and agony over his older brother Imad, who was arrested at the age of seventeen by the Father Assad’s regime. Fouad’s father had sold everything he owned and spent it bribing the regime’s security officers in order to find out even one piece of information about his imprisoned son, but all his efforts within three years were in vain until he passed away so that Fouad had to carry the burdens of a family of six.

His eldest brother Ziyad, residing in Iraq, was prevented from visiting his family because of the tense relations between Damascus and Baghdad in those days.

It was his destiny, like any Arab citizen inside and outside the homeland, to pay the tax for the fighting of dictatorial regimes with each other. After closing the borders between the two countries, every Syrian residing in Iraq was considered an accused

person, and he was not able to return to his country; and every message coming from the elder brother caused the family to be summoned to the security branch for investigation, and once, Fouad was brutally beaten by the interrogators and they did not leave him until they caused him a fracture of the palate that he suffered from for the rest of his life.

Thus, he was grown and brought up, and under all these harsh conditions, he carried upon himself the responsibility of caring for his brothers and supporting them, and he kept continuing his efforts to resume his studies until he obtained a seat for himself in the Faculty of Arts, Department of Philosophy. The environment in which he was brought up was sufficient to develop his awareness, sharpen his culture and to increase his desire to reach the heavens of Freedom, equality and principles of justice and to dislike all forms of injustice and tyranny.

Fate decided for me to meet him in the corridors of the university and get to know each other through our mutual friends, and I was a twenty-year-old girl from the Al-Suwayda governorate, and I belonged to the Druze community whose customs and traditions forbid any one to marry a person from outside the sect. This idea never occurred to me but Fouad the free man who was steadfast on his principles, values and principles made me go through an experience for which I almost paid my life. Actually, his high-class personality, high culture, and liberal way of thinking made me more attached to him and made us get married.

All my life I lived with him, I was a free woman in every sense of the word. I still remember our first visit to his family’s house in Deir Ezzor. I was surprised by his room, which was full of books. I asked him for a clarification: “Fouad, have you read all of these books?” He started laughing at my words and kept laughing until his tears got out of his eyes. “Do you think I brought them into here to swear by them?” He was one of the people who influenced everyone he met, and he was a personoverflowing with love and affection for his family and children. I don’t remember that he hit one of them even once throughout his life. His biography was a featured with struggle at all levels. He was a university student, and he was the breadwinner for his family and brothers. However, he created for himself time and space for poetry and writing, so he produced three poetry collections. He named the first collection (Amarji), which means liberty in the Sumerian language; he gave his daughter this same name. He named his second collection (When My Father Died), and the third collection (To Mum). In fact, his literary output remained in Syria as a deposit with a friend because I could not bring it with me to Turkey. 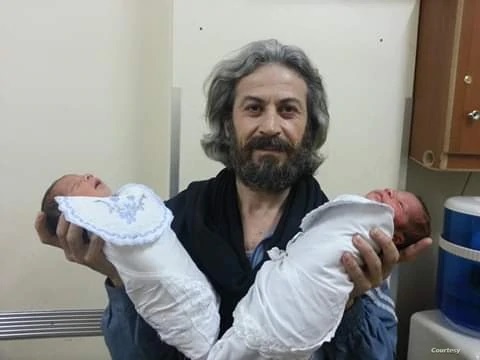 The most beautiful stage in our life was the start of the Arab Spring and the outbreak of the Syrian revolution. We used to sit sown at the corner of the house, far from the children, to have long discussions between us about the possibility of this happening in Syria. The birth of the revolution was like a new birth for us, our aspirations and our hopes for freedom and liberation from the yoke of oppression and tyranny that has loomed over this country for five decades.

At that time, Fouad used to frequent the Damascus Radio building, where he was working on writing directive programs for children and for the evening that was broadcast every Thursday. He was not officially a contractor, but he worked for intermittent periods, and as a result of what he heard from discussions of the “Shabiha” from the media and artists of the regime working in the same radio station, he no longer had a desire to go to work.

Fouad participated in the peaceful demonstrations that were taking place in Daraya and Al-Midan in Damascus, and as a result of the security tightening on the capital, he began to travel to his hometown, Deir Ezzor, and he was absent from us for months due to his persistence in attending all the sit-ins and demonstrations, for he became an active person in the peaceful movement in the city. He continued on this case until he decided in mid-2012 to go and not come back before the fall of the regime, and he did not want to inform me of his intention. To reassure me, he took our eldest son Guevara with him, and he said goodbye to me at the door and told me “Do not be afraid. I will return after only two weeks”, and the two weeks turned to be seven years.

A week after his travels, the Assadist repression machine, represented by the criminal Syrian army, began to storm the city of Deir Ezzor, Launching the so-called Republican Guard campaign against the governorate; it was one of the fiercest and bloodiest battles against unarmed civilians. As a result of this campaign, all mobile calls stopped, and when I called them via the landline to check on them, I heard the thunder of shells and the sounds of barrel bombs hitting the places inhabited by defenseless civilians.

Every time I call him, he calmed me mind saying, “Be patient, we have become closer to freedom.” In the next week, all means of communications with their city were cut off, and four months passed without any news about them. That time, I depended on the news reports to try to expect what was happening to them.

In the tenth month, I received a call from an unknown number. A man spoke to me saying, “Your son is with me, come take him at 1 O’ clock from the bus station.” When I went to pick him up, I burst into tears the moment I saw him. I cried a lot about the condition that he had come to, as his body became very thin; he was like a ghost as a result of the siege that had been imposed on the city for many months. I asked him about Fouad. He told me, “Your husband is carrying the camera flying from place to place.”

I later learned that Fouad was working as a media and relief activist in the liberated areas, Here, I realized at the time that it was the point of no return for Fouad; he chose the path of freedom, dignity, the state of justice, citizenship, and the law. I asked all my children to keep the matter secret and told them to say that their father is missing if they are asked about him; if any news leaked to the regime’s intelligence services, we will inevitably be subject to arrest or execution at their hands. Therefore, it is forbidden for any of the children to call him “Baba” when he calls, and we agreed to call him “Abu Ahmed”. One day, he called me in a hurry and said to me, “I have become a wanted person for regime. They will question you, so tell them that we have been divorced for a long time and that you know nothing about me. he said this, of course, because he was worried about us.

He was not with the militarization of the revolution, and he was an opponent of violence despite all the brutality and criminality of the regime because it was certain that the regime would drag us into this confrontation, and we are the weak side in this equation.

He continued his relief and media work in Deir Ezzor until the dark forces (ISIS) entered the city, and despite his friends’ appeals to him to leave away, he refused and always told them “this land is ours and the Euphrates is ours, they won’t defeat us; we are the sons of the sun.”

The moments I lived were like a terrifying nightmare when I later learned how he was arrested from the field hospital (Aisha Maternity House). He was kidnapped by dark forces on 08/20/2014 and his fate is still unknown to the moment. They accused him of being a secular, infidel, as they put it, who was calling for a civil state. They referred to the fact that the name of his son was “Guevara” and that he was married to a Druze woman as evidences to their accuses.

Here are we coming to the tenth year of the revolution, living the tragedy altogether with thousands of the families of the detainees and missing persons. Our souls are related to intermittent and contradictory news, sometimes confirming death and sometimes denying it.

My kids and I spent many years searching in the lists of detainees and martyrs that are issued periodically looking for a glimmer of hope looming on the horizon in spite of the bad thoughts of despair that possess us. We spend our lives waiting with the hope that we will meet one day.