Mother’s heart is her guide 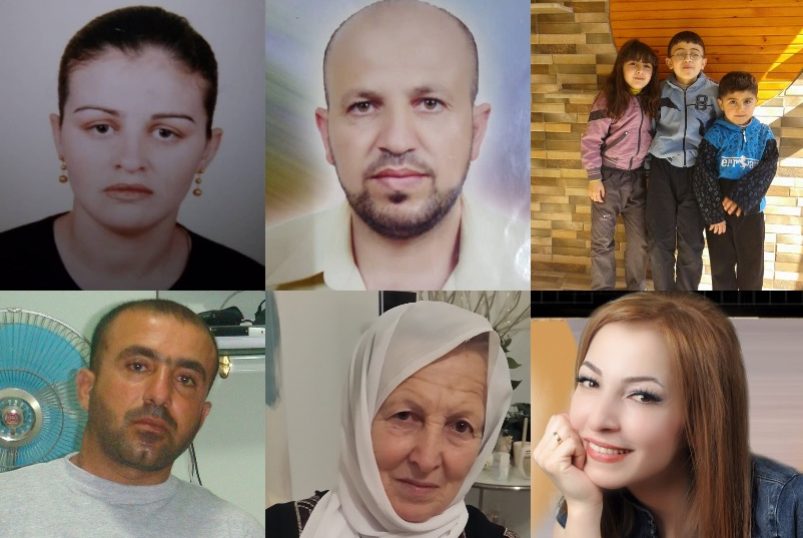 On the twentieth of March, just before Mother’s Day, Mrs. Asmahan Al-Meemar returns to Syria after three months of staying with her son Mahmoud, who had been living in Saudi Arabia. She had already received a gift from him. How beautiful it is to receive a grandson as a gift! As Mahmoud had already known how much his mother loved his father, and he had also known the great pain and suffer she felt when she lost him in 2008, he decided that his gift would be attached with a love paper from memory. Therefore, he gave him the name Aladdin, in honor of his father, hoping that he would send her joy and renew a love that had been surrounded with pain.

However, like every mother, she had to return to her home in the village because she was not able to keep away from her other children, despite she fully knew that Al-Maboujah, which is the name of their village where they lived, lied on the contact line with the areas controlled by ISIS.

It is clear that her decision was decisive, as Mahmoud’s constant attempts to convince her to stay longer with him were all in vain. He just received disapproval on her side. It seems that the heart of Asmahan as a mother was overwhelmed with all signs of reality. She felt a danger threatening Mahmoud’s brothers, so she preferred to go back to the village where grudge lurks over her children to stays with the newborn of the family.

Is there a heart with a truer prophecy than a mother’s heart forecasting danger?

The prophecy took only ten days to come true, and on the thirtieth of March at night, ISIS members and stormed the village with their guns killing fifty of its residents and kidnapping the rest. It was the same fate that Umm Mahmoud’s heart predicted: she and her sons Ibrahim, Essam and Rasha, her daughter-in-law Wafa and her three grandchildren Alaa, Judy and Taj were kidnapped.

“If we had been only a few minutes late, we would have missed the plane. I wanted to spend the longest time with her before she flew; we were talking in the airport terminal. We did not feel the time passing. … Oh! I wish she had been late for the plane. I wish it, but this was fate.”

April Fools: if only it were a lie!

The end of March was not a day when Mahmoud exchanged an innocent lie with his friends as everyone does. Actually, his friend’s message was a black hole in his life, a savage hole that devoured all the smiles that were waiting for their appointments.

The message of Mahmoud’s friend fell upon him like an earthquake: he told him that his entire family had been snatched from his life, and that ISIS criminals had attacked the innocent civilians in the family’s village, seizing the lives of some and kidnapping others. Civilians’ necks were under the control of savage strangers in a country that is destined to be ruled by war criminals and burned by its sons.

Thousands of kilometers away, there, in his exile that turned into handcuffs, dozens of letters with conflicting news about the fate of his family poured over Mahmoud throwing him into a sea of bitter helplessness and oppression. With every message of hope, visions clashed and are overwhelmed with obsessions.

“As far as I can describe that moment … for two days I was walking with my back bent at a right angle … There is a proverb saying one’s back was broken; this means my back broke … because at this moment … you do not expect what might have happened.” 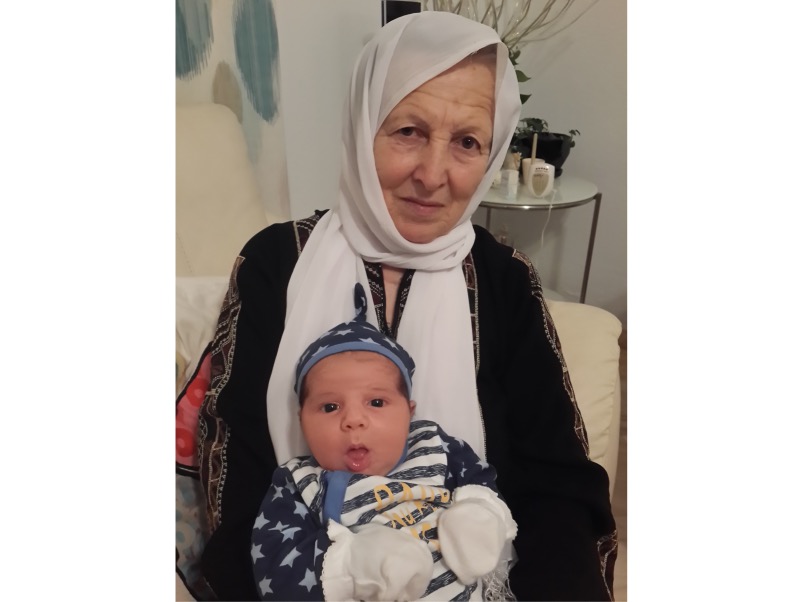 A window of hope, but

On the second day, Mahmoud knew that someone had seen them in a village that was under the control of ISIS and that all of them were fine.This news was a glimmer of hope in the secrets of a brutal painting that was overshadowed by evil in its most opaque form. It was a window of hope.

“My family survived the massacre in which children, women and elderly people were killed and homes were burned … It was an unspeakable horrific night.”

Mahmoud and his brothers made sure that their family was fine and that they were placed under house arrest in the areas controlled by the organization, and the family was able to reassure them on the phone.

I spoke with them briefly without asking them about the details of the incident. Mahmoud says, “My only concern was that I wanted to be reassured that they were fine and that no one was injured … I talked with my mother, and as usual, despite the bad situation in which they were involved, she was afraid for us despite we were safe. She was worried that we would be anxious or something bad happened to us … It was everyone’s tent to hide in… “

Mahmoud and his brothers did not have time to secure the family outside the organization’s control area. Soon, the organization arrested his two brothers for the second time after three days, and then the rest of the whole family on the fourth day. This was the last time that Mahmoud was able to get any news about his family. After that, he started a long tour in hopeless and endless search of them.

A lot of hope, blackmail, and disappointment

Mahmoud, along with his brothers, began searching for any news or information that might contribute to knowing the fate of his family, and like many families of the forcibly disappeared in Syria, they were prey to extortionists and immoral people who profited from the pains of people hunting their victims and armed with experience and skilfullness, and they played their tricks with all their mean ways and absence of conscience, stabbing sick hearts that had grown old early because of the pain of loss and deprivation.

Mahmoud says, “We accepted that we were blackmailed, and even though we knew that most of the news that reached me was not true … but we used to say that this is true, so that it might be true at the end … and “a drowning man will catch at a straw.”

The brothers did not have any problem with paying any amount of money, so there was no loss that was equivalent to the “loss of lives”, and the loss of eight smiles, including those of three children who had just sprouted.The lives of the four brothers centered around the Juggernaut of loss, begging for ideas and means, and consuming all the ways that might pull their family out of the hell of ISIS.

During several years, they received conflicting information about the whereabouts of the family, and with every hope that emerged, another was fading with all the endings combining to squeeze out disappointments and heartbreaks from the hearts of the brothers. There were many rumors telling them that the family will be released soon, but every time it turns to be illusive.

A life mixed with bitterness:

The color of sadness was not only present in the searches for the kidnapped family, but rather it leaked out until it overwhelmed all the details of the family’s life, so every interesting smile turned to be a dull act made by the lips, and every fun became a passionate heartburn.

Grief squeezed their necks and joy became deficient, even if it is great, it is “mixed with much pain”, reminding them of that calamity that turned their lives into a nightmare that lasted for years, reminding them of those missing faces and their fates. Even the anniversary of the birth of his first son, Alaa, turned into the memory of his family’s absence in the most horrific circumstances, so the first joy became the beginning of pain: “My son Alaa is 3 years, and I can’t celebrate his birthday at all. He goes to the kindergarten and the children celebrate their birthdays. When he got older, I started asking what his fault is, and why to link the memory of his birth to the memory of my family’s absence. All the details of our life are mixed with bitterness”. A bitterness that the six years that had passed since the family’s absence were not able to heal it. Mahmoud’s wound is still bleeding, and a small memory bearing the face of an absentee is able to turn the most beautiful moments in his life into a tragedy.

“The moment you are talking about a funny old memory, one of the family members suddenly appears in front of you. Here, everything collapses, and the memory turns into complete silence and deep sadness. Everything around you remind you of them: Essam, likes that song of Ilyas Khudr, that meal is Ibrahim’s favourite, Rasha likes that writer. Every time I see kids of the same age of my nephews, I remember how much active they were. Where are they now? What happened to them? Thousands of questions chasing us every moment of absence.”

Much anger and determination to reach the truth and justice

This long road of search and suffering has not deterred or discouraged Mahmoud in his pursuit of the truth and justice for his disappeared loved ones. Despite all the disappointment he was subjected to and the neglect that the issue of the kidnapped was subjected to by ISIS by the international community and organizations that did not hesitate to trade the case, Mahmoud continues to do all his best to uncover truth and get justice. “I try to save my psychological energy in order to achieve something; I want to know what happened, who was involved in all that … I was trying to save all my effort in order to know what happened, I did not open many pictures because I was afraid I could be frustrated and despaired. At the same time I felt I must charge myself with anger. This ferment must still be present. I have to remain angry with every one that let those people down who were never guilty. Even these countries that talked, saw and celebrated their victory over the organization dealt with us badly when we got angry, and they all ignored our pains. I think, that was normal of them.

From the very first moment of the founding the coalition of families of persons kidnapped by ISIS , Mahmoud communicated with the founding families, seeking to unify his efforts with theirs. Then he joined the coalition in March 2020, where he works now with the rest of the families to pressure the international community to reveal the fate of his missing loved ones and achieve justice for them, believing that he and the rest of the families are a right owners and that we cannot allow forgetting or forgiving the crime.