Our participation in the event: “the syrian survivors demanding justice, accountability and active participation” 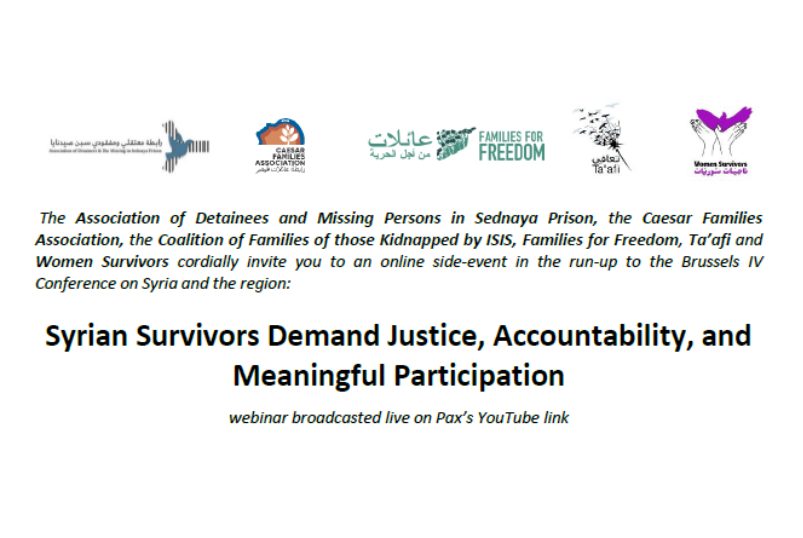 Under the title: the syrian survivors demanding justice, accountability and active participation, the coalition of the families of those kidnapped by ISIS participated in a side event organized coinciding with the convention Brussels IV about supporting syrian and the neighboring countries. The dutch ministry of exterior and the organizations; Impunity watch, PAX and Women Now hosted the event dated 13/06/2020, which aimed to direct and counseling the financial and political stance of countries in the convention according to the needs of the victims and survivors of the syrian conflict. Hiba Alhamed, the representative of the coalition, made a speech approaching the participating countries, in which she shed the light on the situation of the families of those kidnapped, their pain and their sense of disappointment and let down by the international community and the authorities in charge of fighting ISIS. She also clarified the peculiarity of the situation of those kidnapped by ISIS being a non-state actor terrorist organization and its multinational human structure, on top of that she laid forward a number of demands concerning unveiling the truth about the fate of the absentees and achieving justice for them by holding those responsible accountable, asking the international community and especially the countries that defend human rights to take its role actively in helping the families in their battle for truth and justice. Three other representatives of the victims associations and the civil community initiative made their demandes to Brussels convention, which were; Healing Program, Women Now and the Association of Cesar Families.