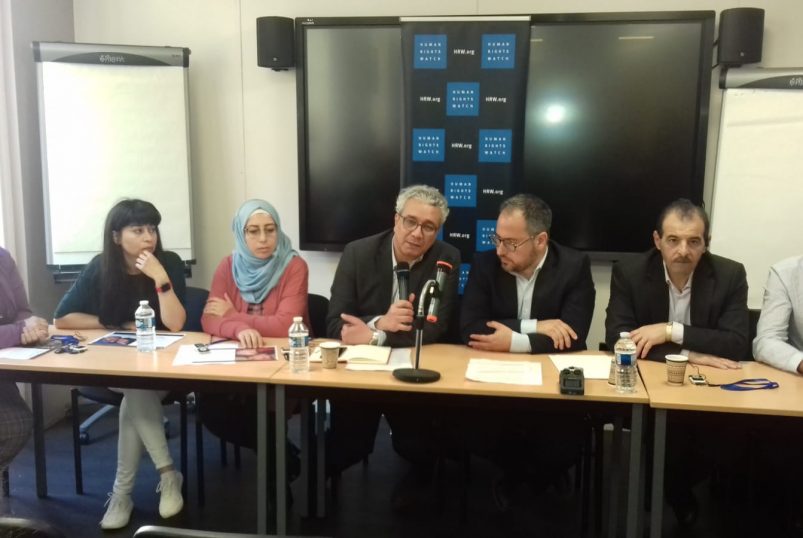 The families of those kidnapped by ISIS announced the establishment of the “The Coalition of Families of Persons Kidnapped by ISIS – Da’esh” at a press conference held in Paris on May 14, 2018. A number of the families of the kidnapped, Lawyer Anwar Al-Bunni, Director of the Syrian Center for Legal Studies and Research, and Mr. Nadim Houry, the former director of the terrorism and combating terrorism program at Human Rights Watch attended the conference. The establishment of the coalition was the result of the complete defeat of ISIS by the international coalition against ISIS and the inaction of all concerned parties, including the international coalition regarding this file and their neglect of this issue, as the families did not receive any answers about the fate of the forcibly disappeared at the hands of ISIS. It was stated in the founding statement of the coalition :

The international coalition fighting the “Islamic State in Iraq and the Levant” (ISIS) and the “Syrian Democratic Forces” (SDF) associated with it announced, in late March 2019, that the criminal formation had completely decreased from any areas it controlled in Syria. This is good news for the Syrians, for (ISIS) have inflicted tremendous harm on countless of them and their struggle for freedom, dignity and justice in Syria, and it is better for us, as families of the abducted persons by (ISIS).

However, we notice today an atmosphere of ambiguity and conflicting information that prevails regarding the fate of our loved ones, despite our confirmed knowledge that (ISIS) were driving some of their prisoners as they were losing their control, and despite our confirmed knowledge that the organization’s detention centers, headquarters and documents are today in the hands of the international coalition and its forces, and also despite our

confirmed knowledge that many (ISIS) have been captured by the international coalition and these forces. It is to our regret that the last two did not bother at any time to say anything about the fate of the disappeared and prisoners, despite the fact that the political and legal responsibility rests on their shoulders as the de facto authority in the former (ISIS) control areas. These absentees have sons, sisters, husbands, fathers, friends, daughters, sisters, wives and mothers of mothers, fathers, brothers, sisters, husbands, wives, sons and friends who have been looking for years for their return and for any news about them. These absentees are the first to work for freedom, democracy and justice in Syria, the first to reach the prisons of the tyranny regime, and the first to be expelled from their jobs and yet they were pursued and hidden. These absentees are the first to realize the reality of the sudden and overlooked rise of Salafi jihadism in our country in the summer of 2013, and they are the first to resist (ISIS) and its counterparts, with peace, arms, news, or photos, and the first to suffer harm from the criminal formation: kidnapping, seizing livelihoods and homes, and dispersing families. They are the vanguard of resisting the tyranny of the regime and the vanguard of a barbaric resistance (ISIS).

We call on the International Coalition and the (Qasd) militia to provide the information they have regarding the organization’s prisons and prisoners, kidnappers and detentees it had. This can take place through establishing a link channel that let us, the families of the abducted persons, know the available information on the loved disappeared and captured ones.

We believe that revealing the fate of the first (ISIS) resistance fighters and victims is the decisive criterion regarding the intentions of the new de-facto authority and the testing of the liberation claims that it makes public.

we want to know; We want get rid of the state of uncertainty; We do not want to be the prey of ignorance, anxiety, and financial and emotional extortion, as (ISIS) has done for years.

We want reliable news; We want to be told what those in power today know about our loved ones. This is our right, and this is their duty.

Our participation in the event: “the syrian survivors demanding justice, accountability and active participation”