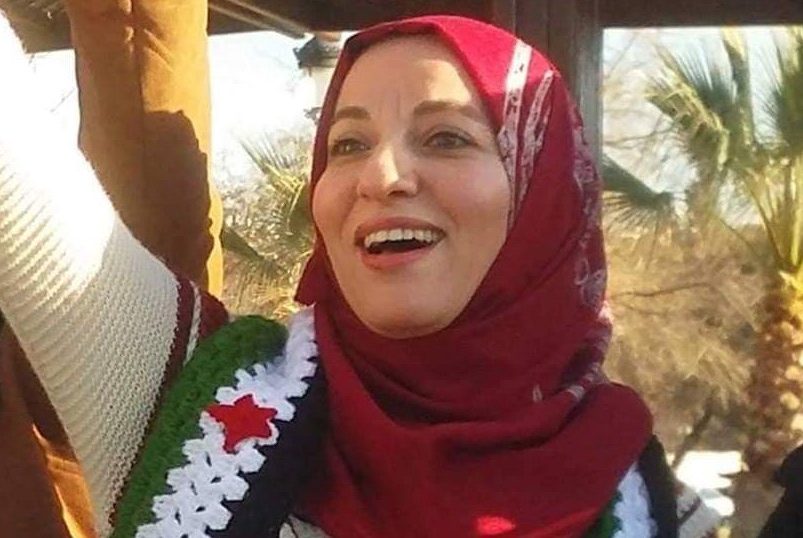 I returned to Raqqa on the tenth of September 2014, and I had decided to settle permanently where my mother, brothers and sisters were. My mother was very sick so I wanted to stay by her side not taking into consideration bombing or displacement I would face, for there is no taste for life without people. I settled down, visited friends and relatives, and tried to find work.

On the second day of my return, the city was bombed, specifically the neighborhood in which I live, and our neighbor was martyred. I went to mourn with my sister, where the looks of people seemed terrifying.  Many women asked me if I intended to settle down and I answered them yes, and they told me that this is a danger to my life in the presence of ISIS, I replied that we would die only in our destined day.

On the 15th of September, that is five days after my return, I was sitting in the garden of the house watching the news on my Facebook page and my mother was in the nearby room lying in her bed. suddenly, the door of the house was strongly knocked. As the electricity had already been cut off and the sound of the generator had been loud, we didn’t hear the sound of the knocking. My nephew went to open the door, and I only could feel the presence of a woman asking me:

“Are you Muna Freij?”

I thought that she was one of my cousins who I had not met for a long time, and she wanted to joke me, so I remained silent. However, I woke up from my amazement when my brother’s wife stood up and told her, “No, it is not Muna. Muna is in Turkey.” I raised my head and saw two armed men in Pakistani clothes, accompanied by an armed woman wearing an abaya and niqab:

They did not dare to take me because they were not sure that I was “Muna,” so they asked me for my laptop, then it occurred to me to carry it and run to the living room where my mother was lying aiming at taking cover in her shade. I had already known she was my source of security and protection. They caught up with me. Then, with all the power I was given, I turned both sides of the laptop in the opposite direction, so it broke into two pieces. ISIS members did not like that behavior, so one of them took me by the hair to the garden and threw me to the ground. He put his foot on my chest and the rifle on my head threatening to kill me. Here, my brother’s wife wanted to push him away from me, so he started firing bullets in the air, causing fear in the hearts of everyone in the house and threatening everyone with death if any of them took any movement. He was shouting madly, asking them to tell him who of us was Muna and where she was. The scene was hysterical, short, not exceeding a few minutes, but enough to call for amazement and horror, and it ended with the intervention of my sister, who pushed the ISIS element away from me.

People gathered and entered our house after hearing the gunfire and seeing ISIS cars in front of the house. Somebody suddenly pulled me by the hand and asked the women to turn around and help me to escape across the roof of the house, stressing that he would create an altercation with the men of the organization in order to divert their attention from me. Indeed, I crawled to the roof and the women gathered along the stairs, trying to protect me as much as possible until I arrived at our neighbour’s house in the neighborhood behind us where I jumped with one of my cousins.

When I got off, I asked them for something I could wear, for I was dressed in the house clothes and I had no headcover. I went to a friend’s house, but I was afraid that I would cause her trouble, especially after I saw fear in her face. Therefore, I decided to go to Dr. Ismail Al-Hamid’s house. ISIS had kidnapped Dr. Al-Hamid on November 2, 2013, and his wife remained with her four daughters and her son in Raqqa waiting for his return. I arrived at their house with my heart trembling because of fear, I knocked on the door, and one of his daughters (Heba) greeted me with a beautiful welcome as usual, but the features of her face and the sound of her voice changed when she caught a glimpse of fear in my eyes and saw my condition. She asked me to enter and called her mother (Zubeida). Zubeida asked me to lie down a little to rest first and then let her understand what had happened later. So, I lay on the sofa for several minutes, closed my eyes, took deep breaths. Then, I got up and drank a cup of water. I was in a state of shock and astonishment, so Zubeida asked me what happened to me. Before she completed her question, I burst into tears and uttered my smothered words in a hoarse voice:

“They wanted to take me Um Hazem. They attacked our house, and I could only escape from their hands with the ability of Almighty.”

My hands were shaking, and my tears were flowing down my cheeks while I was telling them the story of my escape from the two jaws of the pincers of the Islamic State. I was not the “Muna” they knew at the time; I was not Muna, the strong stentorian voice that filled the squares in the demonstrations and sit-ins. I was not that joyous, laughing, and smiling girl the will of whom could not be broken by the security forces. I was not that same girl with a passion for freedom. I was a broken and frightened woman, under the rule of new executioners who insulted her in the house of her family. Those people who claimed Islam and its approach broke into a house without asking women to cover up at least, and they struck a Muslim woman with such barbarism. Is it Islam that they brought?

Dr. Al-Hamid’s family tried to calm me down and they reassured me that I would be safe in their home until I could escape from this terrifying city, but their attempts were useless. My heart was wounded, and my soul was wailing, unable to comprehend what had happened. I spent several days in their home. We were all overwhelmed by caution and fear, especially after some of my family members paid frequent visits to that house, which means that mere simple monitoring by the Islamic State for them is enough to lead us into the unknown.

They tried to convince me that my presence in this city was a big risk, and that I did not have to live a harsh experience just because I did not want Raqqa to turn into a place that I could only visit in my dreams especially after we had heard a few rumors saying that the organization took the laptop and was able to use the “hard disk” and uncover the privacy and writings inside and that I was wanted for insulting the Caliph.

This is how I found myself hesitated to choose either my love for my city and my family or my fear for myself on the one hand, and to choose either my mother’s warm face or the cold face of exile on the second hand. I was hesitated for some days until I finally gave in, preferring not to be burnt by the fire of ISIS, so I decided to lick my wounds and leave a city full of oppression.

On September 18, 2014, a friend came to their home to accompany me as his wife to Turkey. He gave me the identity card of his real wife. Being a veiled, ISIS members wouldn’t be able to figure it out.

We were all awake at 03:00 AM waiting for the bus that would pick us up; some were watching out the street for fear of the presence of any member of the organization, and the others were calming me and the man who would accompany me down because any mistake could cause danger for both of us.

After the bus arrived at the house, they hugged me, and they mumbled to me with many calls. Those calls were my guardians to reach safety.

“In the grace of the Most Gracious, may God keep their eyes away from you. Wish you safety.”

The bus kicked off with my heart trembling of fear and my tongue muttering all the prayers and verses of the Qur’an, especially when we made stops at ISIS checkpoints where fear and confusion increased. I was afraid for myself and for the gallant man who ventured into his soul to save my life. After we reached the last checkpoint, he hugged me with love, and we wept together. We were weeping for the achievement we had achieved: I survived the sword of the caliphate for there were no more barriers to be afraid of; this was the greatest achievement for those who lived in the kingdom of terror ruled by ISIS.

We reached the borders of Turkey and I called my mother, my saint, to reassure her that I had reached safety. My mother, sisters and brothers began to cry and pray to God for me to facilitate my affairs and help me in my exile. The mother’s heart had felt that this farewell was the last between a mother and her daughter; I did not see her face after that day for she passed away eight months after my departure.