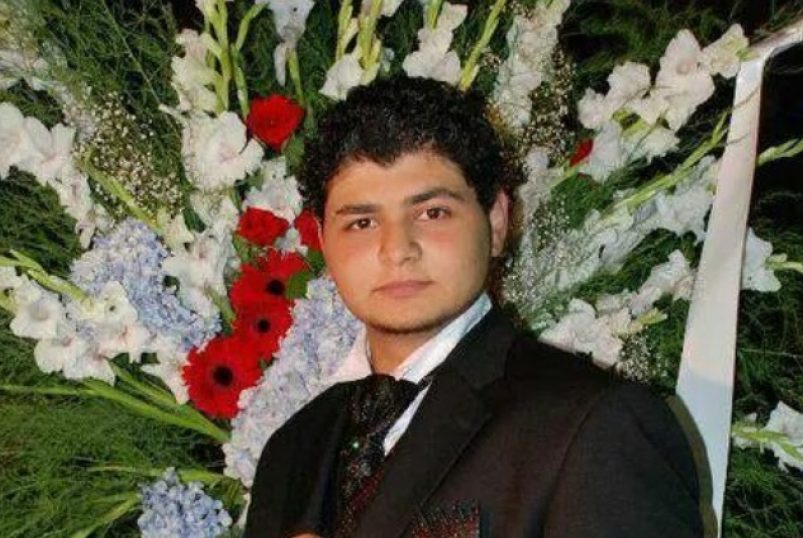 “A creative and compassionate young man with a high sense of humanity, as if he was created only for this time … Words are betraying me. I do not know how to describe him.”

With these words, Mrs. Faten Ajjan begins her talk about her son Abdul Qadir Ratib Al-Haddad, who has been kidnapped by ISIS since June 26, 2013.

“Abouda,” as his mother would like to call him, was born in Damascus on January 1, 1992, at 11:00 AM. He was not an ordinary young man compared to the young men of his generation, but he was exceptional and distinguished as he showed of political awareness and a high sense of responsibility at an early age. He lost his father, Journalist Ratib Haddad when he was still a child; he was a year and a half old.

Abouda loved the art of rap. He wrote his songs that he used to compose himself.

His songs simulated the reality of the Syrian society, and they reflected his strong sense of this society, even before the outbreak of the Syrian revolution. He had to travel to Beirut to record his songs because the studios in Damascus refused to record them for him due to the boldness of the message it carried:

Because of richness and poverty we even have no grave

Meditation and support are the ones which grant you a palace

People work like monsters, yet they can’t even get their cigarettes

People sitting at their desks only pay pennies but win millions

Abouda used to plan to study journalism and media and then travel to work in Dubai, but suddenly he decided to join the “military service” though he was still too young. His daring and ability to make decisions at this age, surprised his mother and made her always see him as the responsible “family man”, especially after her eldest son traveled to work in the Emirates, Abouda was all her family and her life. He imposed himself as a “family man” with his noble qualities. His mother saw him as “affectionate” ; he never told lies. He was, in an unreasonable way, frank, honest, loyal, kind and generous. Abouda was honorable; yes, he was a really honorable man. “Abbouda” was a beautifully compassionate young man.

Only one month passed after Abouda joined the military service when the Syrian revolution broke out in 2011, and his life started to gradually change. His mother declared her supportive stance of the revolution and its demands from the very beginning, but Abouda kept silent and showed a fierce hostile and anger at Al-Jazeera channel which was reporting happenings of the Syrian revolution. This sparked controversies and confusion between him and his mother.

Mrs. Faten did not know about her son’s conduct, and it was painful for her to see her son not supporting the Syrian revolution. She describes the matter, saying:

“He got very angry and was afraid every time I watched Al Jazeera. He would never like me to watch Al- Jazeera news, and this was bothering me. I wanted to know if he was with the Syrian revolution ; I asked his friends about that, but they did not give me any clear answer ; they always said, ‘Abouda is a wonderful person. Do not worry, Abouda is morally and ethically better than all of us.’

Both confusion and controversy between “Abouda” and his mother did not last long because he decided to disclose his attitude towards the “Syrian revolution”, by defecting from the “Syrian army” and joining the resistance in Idlib countryside. His mother later discovered that he had been involved in the “Syrian revolution” since the first day, but he was afraid that his matter would be discovered early, which would expose him to the risk of being liquidated due to the security tightening in the “Syrian army.”

Mrs. Faten learned later that, during his military service, her son used to help the “Syrian army” soldiers who were called by the security forces, due to accusations of their belonging and participation in the “Syrian revolution;” he was warning them and helping them to defect before they were arrested.

It was never easy for Mrs. Faten the day when she learned about the news of her son’s split; she lived a mixture of contradictory feelings: both joy and pride of her son on the one hand and fear for him on the second hand. That day, he called her to tell her how much he loved her and how much he missed her. he also wanted to ask her to read a letter he had left in his room. The letter said:

“From the first moment I was with you, you let me walk along the road; I care about the people who are around you; these are my family and my people. I have been with the revolution since the first day. I was afraid of coming to light too soon for I might be executed. I love you and miss you Mama.”

Faten traveled to Turkey to start her work as a journalist and director of the “Syrian Family Foundation” in the city of Antakya, and Abouda traveled to “Jabal al-Zawiya” in Idlib countryside to work as a photojournalist. Later, he went to “Jabal al-Akrad” in the countryside of Lattakia, where he covered the massacres of the “Syrian regime” and its brutal campaign against civilians. He was not afraid at all. Rather, he appeared on the media stations with his true identity and his uncovered face. He lost many of his friends in the bombings of the “Syrian regime;” he survived many times by chance. He was a brave journalist on the battlefield.

Since the beginning of 2013, Abouda has begun working with “the Center of Civil Society and Democracy” in their office in the Turkish city of Gaziantep. In June, the Center assigned Abouda a mission in Syria in the liberated Idlib countryside. He came to his mother in  Antakya, and they decided to leave together to Syria. Abouda went to the countryside of Idlib, and Mrs. Faten went to the countryside of Lattakia, where she had some work to do there. They had agreed that each of them would finish their work and return together to Turkey. Mrs. Faten returned alone, but Abdel Qader had not returned so far. He was kidnapped by ISIS at the Atma border crossing. Up to now, his mother has not known anything about his fate. 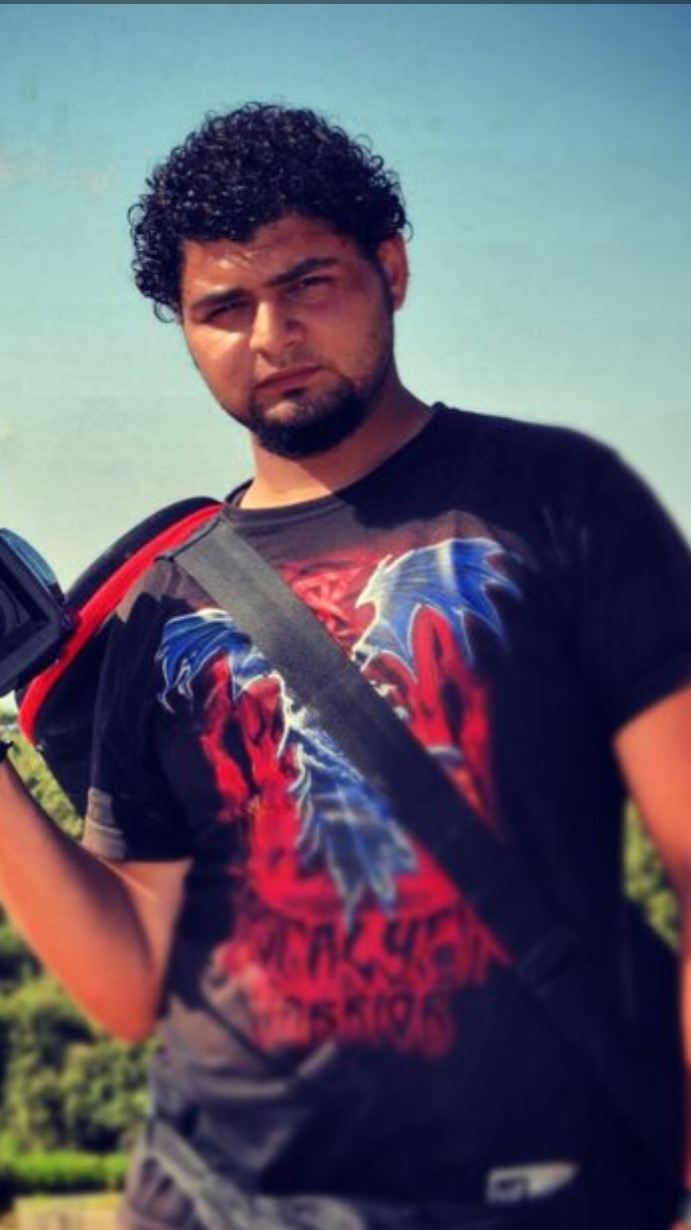 That day, Mrs. Faten spoke to him for the last time at 7:30 pm on Facebook, and he told her that he wanted to return to Turkey because of his headache for he was suffering from a “Migraine”, and his friends could not find the right medicine for him in Syria. His mother waited for him in the city of Antakya till the morning, and she could not close her eyes even for a few minutes. She was worried that her son would not return home. In the morning, she learned from the Center for Civil Society and Democracy, that Abouda was lost after he left Saraqib. On the third day of his disappearance, the Center for Civil Society and Democracy told her that he was arrested at the checkpoint in “Atma” and his camera and laptop equipment was confiscated.

The people in “Saraqib” and its revolutionaries knew this; the driver who accompanied Abouda was from Saraqib. They went to the “Sharia court” of “ISIS” to demand the driver and “Abouda”. On the third day, the driver was released, and Abdul Qadir was still being held in ISIS prisons. Later, the driver said that during their detention, he was very scared and burst into tears, and Abouda started to calm him saying: “Don’t be sad.” Today, more than seven and a half years have passed since Abouda was kidnapped. Abouda’s mother did not disappoint him. Rather, she tried everything she could do to know about his fate. All was in vain. Nights, days and years passed, and Abdul Qadir was still waiting for his mother, who tried all her best to know about his fate and to save him from the prisons of the organization.

Faten added, “I entered Syria many times, and I tried to search for him and make agreements. Many tried to exploit me and defraud me, but I always accepted, hoping that they would be honest and return Abouda. I received the latest news every day. I went to the prisons that the organization used to use, I went to centers where the organization used to train its soldiers. Regarding to Abouda, my whole life revolved around Abouda and the search for him, but no answer.

Abdul Qadir’s absence was not easy for his mother, but rather left many scars, wounds and pains. It changed many things in her life but rather turned it upside down. She devoted_ and still is still devoting_ all her time to searching for him. She even stopped working in the journalistic field. She had not been able to write until today about him or about any other issue in her field of work. She described the change in her life, saying: “Everything has changed, Abouda is everything in my life, my pen broke, my fingers broke; I cannot write, I am unable; it is over; everything inside me broke, Abouda was the axis of the universe and I lost this universe. My heart broke. My voice was loud, and I lost my loud voice. I started to fear; I became afraid to write anything against ISIS and the regime. I wish they had taken my life and left him.

Today, Mrs. Faten is living alone as a refugee in France, her fifth exile, after she left Turkey in 2018, and she is still waiting for Abouda in her exile despite her feeling very helpless, due to her inability to help her son and reach him. She asks, “Is it reasonable that all these human rights defenders and world powers are unable to solve the issue and help our children?”

Despite her feeling of helplessness and “absurdity and unprofessionalism” of all that the civil society organizations are doing concerned with the issue of detainees, Mrs. Faten did not lose hope and did not stop working for this issue, as she is today a founding member of the “Coalition of Families of Abducted Persons with the Islamic State – ISIS” She works with them in the hope that they all reach the truth, achieve justice for their loved ones, and hold those who are responsible for their suffering accountable